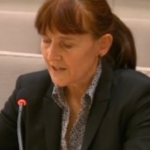 Margunn Bjørnholt is a sociologist and economist, a Research Professor at the Norwegian Centre for Violence and Traumatic Stress Studies (NKVTS) and a Professor of Sociology at the University of Bergen. She is an expert on gender-based violence, and her current research focuses on sexual and gender-based violence against women migrants and refugees, violence in indigenous Sámi communities and intimate partner violence. Her doctoral dissertation Modern Men focused on men and their role in the promotion of gender equality. She has a broad background as an academic, a civil servant, a consultant and a leader in the NGO sector, and has formerly worked at the Regional Development Fund, the National Institute of Technology, the Work Research Institute and the University of Oslo. She has served as an independent expert on gender equality to the European Commission and as a member of the Norwegian delegation to the 59th and 60th sessions of the UN Commission on the Status of Women (CSW). She is a former President of the Norwegian Association for Women’s Rights and was the first President of the Norwegian Women’s Lobby from 2014 to 2016.